We offer robust procedures for industrial manufacturing of nanoparticles 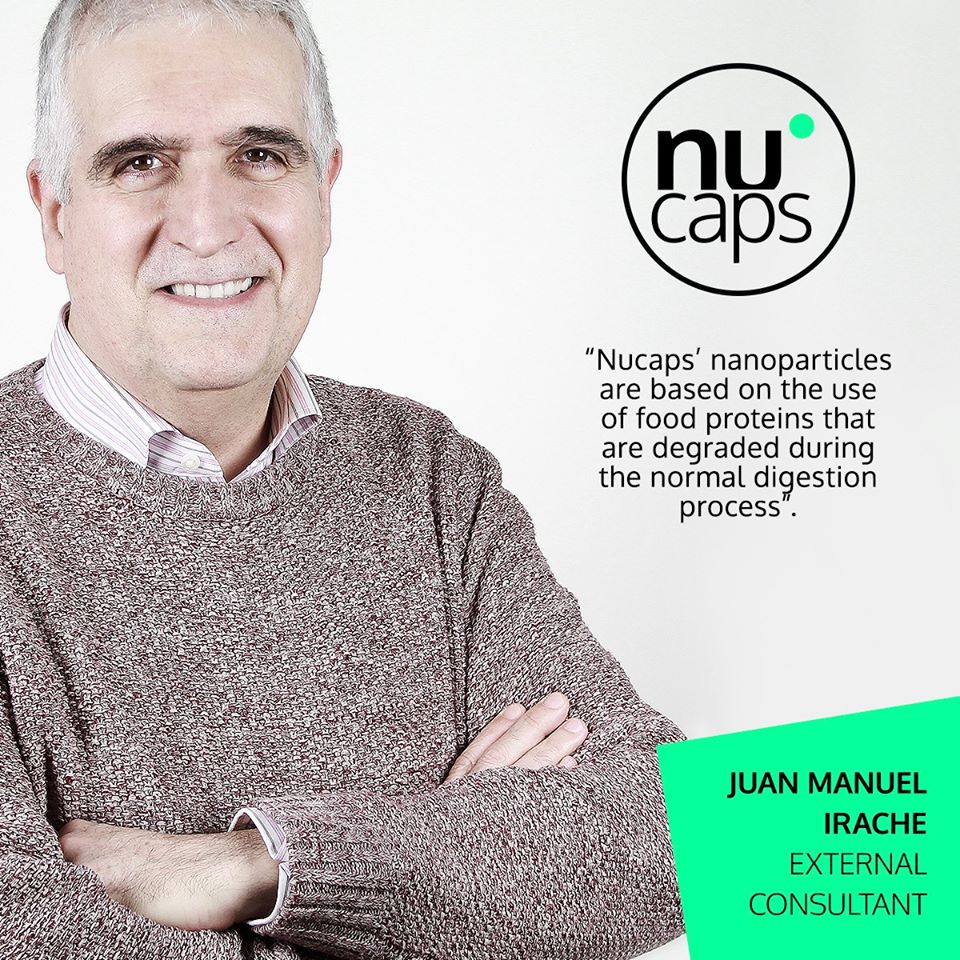 Juanma Irache, Doctor and Professor of the School of Pharmacy and Nutrition of the University of Navarra, works, together with the Nucaps team, as an External Advisor, since 2007. He was Professor at University of Rouen, France, during the years 1993 to 1996. Juanma was appointed in 2016 as an academic corresponding of the Royal Academy of Pharmacy of Catalonia, which recognizes in this way the professional career of this expert in Pharmacy and Pharmaceutical Technology. He is a corresponding member of the French National Academy of Pharmacy as well.

How did the idea of Nucaps come up?

In 2007 we were invited to participate in an Euroinnova project (Functional foods), granted by Gobierno de Navarra and coordinated by Carlos J. González Navarro (at this moment, Head of R&D of CNTA). In this project, one of the work packages was focused on the development of new nano- and microparticles for the incorporation of dietary compounds to food. From this research, different patents were issued. At this moment, CNTA and UNAV (proprietary of the patents), decided to form a Consortium with Idifarma and CINFA in order to explore the potential possibilities of these patented technologies. During 4 years aprox., and within the Consortium NUCAPS, different aspects such as toxicity concerns and new developments involving the development of microparticles for probiotics delivery were also explored. Finally, in 2017, the Consortium NUCAPS decided to create Nucaps Nanotechnology SL for pursuing the development and commercialization of the current nanoencapsulation technologies.

How do Nucaps’ nano- and microcapsules work?

They work as carriers offering security protection for the loaded active, facilitating their arrival to the intestinal epithelium and the absorption of the compound of interest. The compound of interest is nano- microencapsulated in the Nucaps’ devices order to maintain the integrity and activity of the loaded compound (drug, active, etc.) until its arrival to the intestinal epithelium, in which the compound would be released in a controlled way facilitating its absorption and promoting its oral bioavailability.

Which are the main advantages/benefits of nanoencapsulation in nutrition?

Which products would make the most of Nucaps developments?

Those products with nutritional and/or healthy properties that present a very low oral bioavailability and, therefore, by conventional formulation techniques their efficiency is very low (because they are not absorbed from the gut). In this group it is possible to include a number of bioactive phytochemicals (e.g., flavonoids, anthocyanins and carotenoids).

What do you think distinguishes Nucaps from other companies focused on encapsulation?

The project involves experts from different and complementary fields and sectors Nucaps’ nanoparticles are based on the use of food proteins that are degraded during the normal digestion process. The procedures for the production of nanoparticles only involves environmentally acceptable compounds.

As an expert in your field. Which are in your opinion the short- and medium term challenges in the field of nanoencapsulation?

And what about Nucaps challenges?

The main challenges are to offer robust procedures for industrial manufacturing of nanoparticles and be perceived by companies as a provider of solutions for their formulation problems.